With the K70 RGB MK.2, Corsair is not reinventing the wheel. Instead, it includes modest updates to an already excellent gaming keyboard. The K70 RGB MK.2 represents the exceptional quality we have come to expect from Corsair, with a robust aluminium frame utilizing rugged cherry branded switches.

A combination of something old and new

There are abundant similarities between the K70 MK.2 and the K70 LUX RGB. Both feature a durable aluminium chassis and radiant RGB lighting per key. The two generations come packaged with a removable rubber wrist rest and a grey textured key set. They also share the same dimensions and weighs the same. Both models are even priced identically, with the only discernible differences coming from the K70 MK.2’s new dedicated media play buttons and a few minor changes.

The K70 MK.2 maintains the rock-solid key design of Corsair’s other mechanical keyboards, with the media control keys holding their position just above the numeric keypad. However, MK.2s are considerably higher, making them easier to reach if your right-hand rests on the numeric keypad. The Corsair brand is more pronounced on this model, with a prominent translucent faceplate affixed to the front and centre instead of the minimalist logo relegated to the upper right periphery on the K70 LUX. Another new addition to the MK.2 design is an X-shaped channel that runs under the keyboard body, allowing you to route cables underneath without cluttering your desk.

The layout of the K70 MK.2 is a discrete and standard 104-key layout. This has the dual benefit of allowing for more prominent viewing of RGB lighting and allowing you to easily remove any debris that may accumulate under the keys. The entire frame is tethered to your desk via a generous length of braided cable, which ends with two USB-A keyboard inputs and provides power to the K70 MK.2’s USB pass.

Like its predecessor, the K70 MK.2 also features physical buttons in the upper left corner of the keyboard that can be used to change profiles and adjust the brightness of the backlight. These settings can also be managed through Corsair Utility Engine (CUE) software, which continues to serve as a trusted peripheral management platform. CUE software remains a solid hub for managing the various options for all your Corsair devices, allowing you to easily record and manage macros as well as adjust the MK2’s extensive lighting options.

Variety is a spice

Possibly the most distinctive update to the MK.2 is the additional option for Cherry’s new Speed ​​Silver switches, which previously made their debut with Corsair’s K95 RGB Platinum. These new switches feature a shorter actuation distance and require less force than the standard red, blue, brown, or silent switches that are also offered with this model. Being able to customize your switches is nice, but I’d like to see Corsair build on this idea while also allowing customization of other individual components. Small cosmetic changes like colour or font on the keys can make a big difference by separating Corsair keyboards from the crowd. We’ve already seen Razer set this example with pink and white versions of its BlackWidow keyboards.

The new Speed ​​Silver switches offer a higher level of speed and responsiveness and incorporate a slight tactile bump compared to other switches. The feel is similar to a brown switch that requires a little less effort. The shorter actuation distance makes this switch ideal for gaming by putting as little resistance as possible between its inputs and seeing them translated on screen.

Stay on the beaten path

The K70 MK.2 is a smooth iteration on an already excellent keyboard. Small tweaks in this generation, including the option of new Speed ​​Silver switches and minor aesthetic updates, make the K70 MK.2 a strong competitor in the field of gaming RGB keyboards. Therefore, it is an amazing and reliable option for gamers. 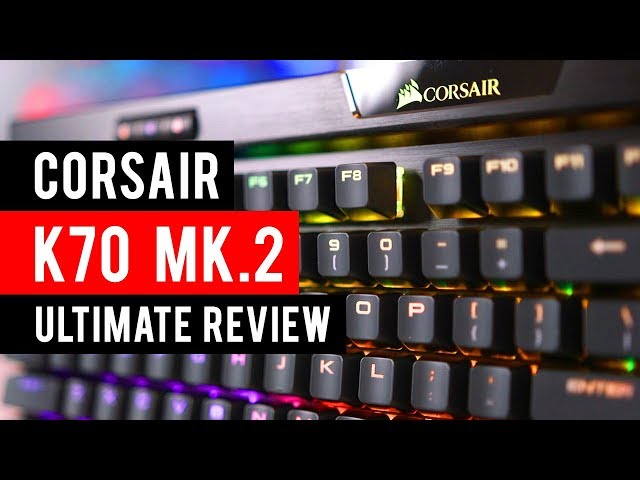 You can buy this product on Amazon (We might get some commission).